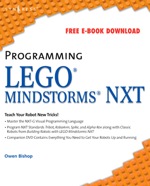 Programming LEGO MINDSTORMS NXT by Owen Bishop is a how-to guide for programming NXT robots using NXT-G and Microsoft VPL. The book features 10 projects including a maze solver, a robot house builder, an obstacle avoider, and more. Also inside are flowcharts and data flow diagrams for describing the process of developing programs, and an included DVD has the programs as well as an e-book version of the text. The programs range in complexity from path-following to generating some degree of artificial intelligence. 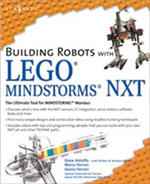