The following list sorts No Starch Press NXT books by descending publication year. Each image has a caption with the publication year and compatible NXT set (either NXT 1.0, NXT 2.0, or Education NXT). 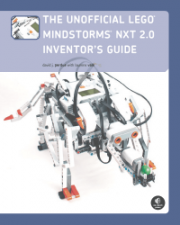 The Unofficial LEGO MINDSTORMS NXT 2.0 Inventor’s Guide by David J. Perdue with Laurens Valk is the second edition of the bestselling NXT Inventor’s guide. The second edition focuses exclusively on the NXT 2.0 set and includes sections on getting started with the NXT 2.0 set, building, and programming. The final section presents building and programming instructions for 6 projects, including the Lizard  (four-legged walker) and the Printer (stationary robot that draws). You can build, program, and test each robot with the pieces from one NXT 2.0 set. You can find more information at the book’s companion website. 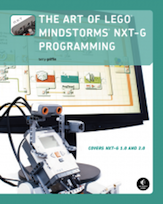 The Art of LEGO MINDSTORMS NXT-G Programming by Terry Griffin teaches readers how to create powerful NXT-G programs with NXT-G version 1.0 or 2.0. The author does so by discussing how to program a basic robot to perform tasks such as line following, maze navigation, and object detection. The author covers essential functions like movement, sensors, and sound as well as more complex NXT-G features like synchronizing multiple operations. Since programs often don’t work right the first time they’re run, the author also discusses useful debugging strategies. 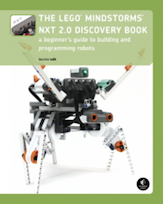 The LEGO MINDSTORMS NXT 2.0 Discovery Book by Laurens Valk features beautifully rendered building instructions for 8 robots, including Strider (a six-legged walking creature), the CCC (a climbing vehicle), and the Hybrid Brick Sorter (a robot that sorts bricks by color and size). Readers will also find helpful information on sensors, building techniques, and programming techniques. In addition, a variety of building and programming challenges  appear throughout the book. You can find more information at the book’s companion website. 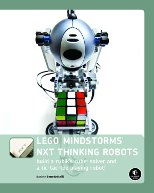 LEGO MINDSTORMS NXT Thinking Robots by Daniele Benedettelli serves up a challenge for advanced NXT users. This book includes complete building and programming instructions for an amazing Rubik’s Cube Solver and a Tic-Tac-Toe playing robot. What is required? A computer running Microsoft Windows 2000 or higher, one complete NXT 1.0 set or NXT 2.0 set, a web cam, some marbles, a couple of rubber bands, and an Internet connection (to download the programs). 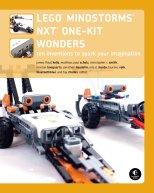 LEGO MINDSTORMS NXT One-Kit Wonders by Contributors to The NXT Step Blog offers detailed building and programming instructions for 10 exciting robots, each of which can be built from the pieces in a single NXT 1.0 set. This book is an excellent resource for learning techniques and getting some fresh ideas. Projects included are PunchBot, a robot programmed using old-fashioned punch cards; M, a robot that sorts M&M candies by color; NXT Dragster, a super-fast racecar; RoboLock, a security system for your robots; and more. 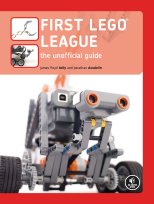 FIRST LEGO League: The Unofficial Guide by James Floyd Kelly and Jonathan Daudelin is all about competition–and specifically how to successfully compete in the FIRST LEGO League (FLL). The experienced authors present strategies, stories, and practical advice. Topics covered include organizing a team, finding equipment, designing winning robots, tackling each of the four FLL components, and more. Both experienced FLL competitors and those new to FLL competitions will enjoy and learn from this guide. 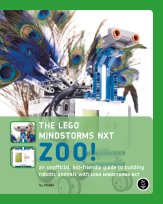 The LEGO MINDSTORMS NXT Zoo! by Fay Rhodes features 9 animal projects with complete building and programming instructions. Animals include Ribbit, a jumping frog; Bunny, a hopping rabbit; Sandy, a walking camel; Spiderbot, an eight-legged spider; Snout, a walking alligator; LEGOsauras, a four-legged dinosaur; Pygmy, a walking elephant; and more. Note that most of the robots require pieces not found in the NXT set. However, the author clearly specifies what pieces are needed on a companion website. 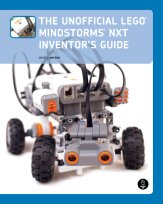 The Unofficial LEGO MINDSTORMS NXT Inventor’s Guide by David J. Perdue is a bestselling guide to the NXT 1.0 set. The book begins with sections on getting started with the NXT set, building, and programming. The final section presents building and programming instructions for 6 projects, including Guard-Bot (six-legged walker) and Golf-Bot (stationary robot that golfs). You can build, program, and test each robot with the pieces from one NXT set. You can find more information at the book’s companion website. 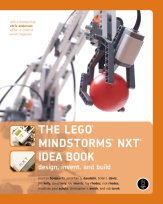 The LEGO MINDSTORMS NXT Idea Book by the Contributors of the NXT Step Blog offers 8 projects with complete building and programming instructions as well as some theory chapters on building and programming. Some of the projects include RaSPy, a robot that plays Rock, Scissors, Paper; 3D PhotoBot, a robot that will help you take photographs that can be converted into 3D images; ScanBot, a robot that scans black-and-white pictures and displays the images on the NXT’s LCD; and Beach Buggy Chair, a roving, rambling robot.